skip to main | skip to sidebar

Warner Bros. Optioned This! (I Think I Might Be Sick) 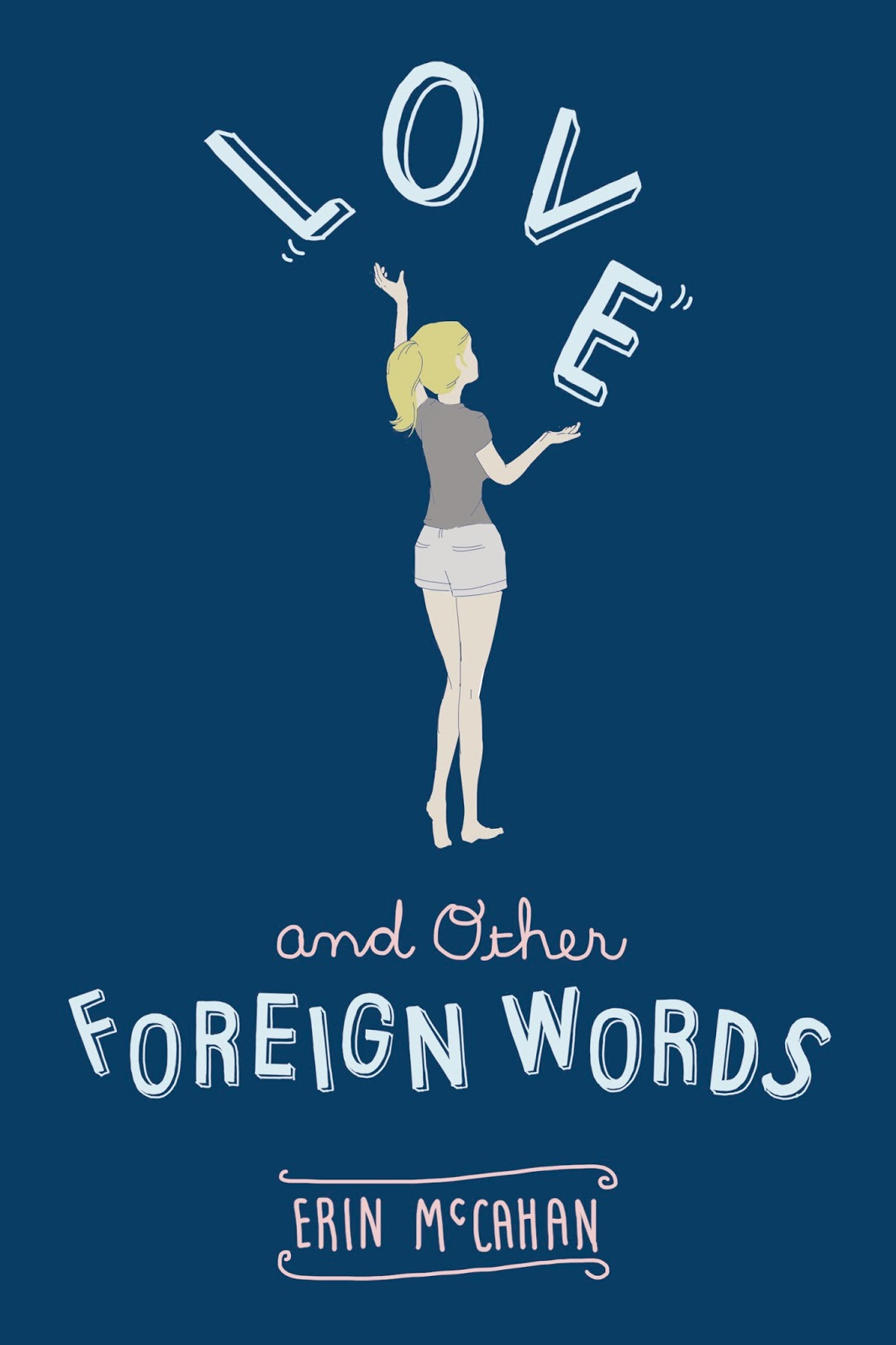 I'm going to write a quick update here before I hand off this site to my designers for a complete revamp, which will, apparently, include my blogging more than once every other year.

My second YA novel, LOVE AND OTHER FOREIGN WORDS, will be released May 1st by Dial Books.  Also this year it will be released in 12 territories in 10 different languages, and Warner Bros. optioned the rights in a pre-empt, under its original title COOL, SWEET, HOT, LOVE.

I process good news exactly the same way I process bad news, which is entirely through a filter of anxiety.  There's a lot of good news surrounding this book, and I'm so grateful for it, but pretty much every time I think about it, I just want to vomit.  So I'm going to stop here and go do something else unrelated to writing and good or bad news.  I think that leaves laundry.

Posted by Erin McCahan at 2:50 PM No comments:

At some point I should update this, shouldn't I?

Does this count?
Posted by Erin McCahan at 3:25 PM No comments:

NYC and the RITA Awards

No, I NOW PRONOUNCE YOU SOMEONE ELSE did not win its categories, but the whole event was so incredibly special and the other writers I met so incredibly nice -- and fun -- that it was impossible to feel disappointed in any way.  Impossible.

I've heard -- we've all heard -- actors and actresses repeat that well-worn line around Oscar time:  "It's a thrill just to be nominated."  And I've thought yeah, yeah, yeah.  Click.  (That's me hitting the mute button on the Today Show.)

But then it was my turn to be nominated for an award described by Publisher's Weekly as the highest honor in romance writing, and 2000 people attended the formal ceremony in NYC, and the nominees' names were announced by category, and our book jackets and head-shots were flashed on two enormous screens, and music played, and Meg Cabot hosted, and I will say for all eternity that it was a thrill just to be nominated.

My husband accompanied me to NYC, but we approached the trip as a working week for me since between meeting my agent, publisher and editor and all the individual events for the RITAs, including the rehearsal, there was very little time left for sight-seeing.  But we did manage -- as we do everywhere we travel -- some marathon walks.  Miles each day just to see what we could see.

I'd been to New York before.  Couple times.  But I was young.  On one trip, I saw Yul Brenner on Broadway in the King and I and thought he was the most beautiful man -- in his sky blue silk costume and matching paisley-shaped eye make-up -- I had ever seen.  On another trip, I had tea with my mother in the Palm Court at the Plaza and wept continuously over my new and, at the time, entirely too short haircut.  I've seen the Statue of Liberty, taken a carriage ride through Central Park, attended the Radio City Music Hall Christmas Show, eaten chestnuts from a street vendor, ridden in the jump-seat of old cabs, toured the wine cellar (a former speakeasy) at 21 and even looked out the windows at Windows on the World.  Oh -- and I saw a transvestite there for the first time when I was nine.  He was dressed entirely in pink, and I longed for a similar outfit.  Especially his shoes.  Pink Candies.  Remember those?

So while it had been quite some time since I'd been there, I had a notion of what the city was like.  But here are a few things I did not expect at all on this trip:

1.  That I would take the subway
2.  alone
3.  twice
4.  and not get mugged or murdered on it.
5.  Fresh fruit carts about every 2 blocks.
6.  Television screens in cabs.
7.  The relative ease of navigating the city.
8.  That I would agree to pay $6 for a bottle of water and a Diet Coke.
9.  Trees on terraces 40 stories up.
10.  The general chaos and sensory overload of Times Square.
11.  That I would try rice pudding, at my editor's suggestion, and really like it.
12.  That, in general, the people -- including the drivers -- are not rude, and there's no offensive "New York City attitude" so often portrayed on television.
13.  How quickly I lost the sense of intimidation I arrived with.
14.  How much I missed seeing green grass, making Central Park a soothing pleasure.

And now for the trip in selected pictures:

Couple of photos from Saturday's Ohioana Book Festival.  We had our own YA section, and I had a ball with Lisa Klein, Sean McCartney, Kristina McBride, Tricia Springstubb and Linda Gerber.  Sean's display for SECRETS OF THE MAGICAL MEDALLIONS was brilliant.  It's partially visible in the top photo -- a treasure chest with gold beads and lovely, shiny trinkets to catch the eye and the imagination.  I just enticed people closer with that giant salad bowl there of Starburst, an idea I swiped from Kristina from Books By the Banks in Cincinnati back in September. 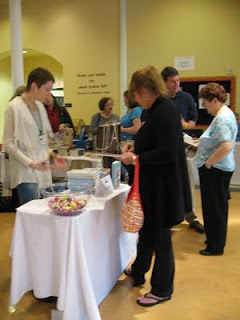 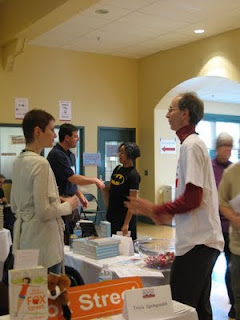 My Week in 7 Words

About 90 minutes ago, I learned that I NOW PRONOUNCE YOU SOMEONE ELSE is a finalist in two categories for the Romance Writers of America's Rita Awards -- Best First Book and Best YA Romance -- and my hands have not stopped shaking yet.


The purpose of the RITA® contest is to promote excellence in the romance
genre by recognizing outstanding published romance novels and novellas.

The award itself is a golden statuette named after RWA's first president,
Rita Clay Estrada, and has become the symbol for excellence in published
romance fiction.
And in the words of the lovely Tina Ferraro, whose ABC'S OF KISSING BOYS was a 2010 Rita Awards Finalist, "This is top honors in the romance writing world."  So naturally I'm a nervous wreck.  A grateful one.  An overwhelmed one, but both nervous and a wreck nonetheless.  I think I have more to say about this, but since I'm fuzzy-headed at the moment from too much adrenaline flooding my system, I'll have to write more later.
Posted by Erin McCahan at 12:57 PM 6 comments:

Finished:
1.  The Invisible Gorilla by Christopher Chabris and Daniel Simons*
2.  The Fall of the House of Walworth  by Geoffrey O'Brien*
3.  A Christmas Carol by Charles Dickens
4.  When You Reach Me by Rebecca Stead
5.  Slaughterhouse Five (again) by Kurt Vonnegut
6.  Cheerful Money by Tad Friend*
7.  Decline and Fall by Evelyn Waugh


On Deck:
1.  The Curious Incident of the Dog in the Nighttime by Mark Haddon
2.  Daughter of Boston by Caroline Healy Dall*
3.  Scoop by Evelyn Waugh